You are here: Home / Archives for Network Interface Card 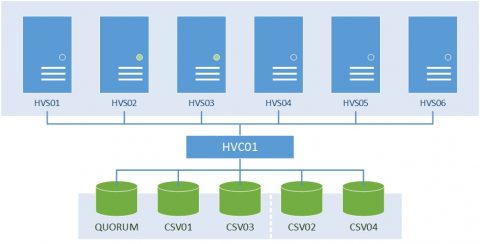 This is part 5 of the following blog series:

I hope part 1, 2, 3 and 4 where informative to you. In this part it is time to talk about an actual Hyper-V Cluster on UCS Blade Servers. Hosting a Hyper-V Cluster on UCS is not rocket science. The deployment is just as straightforward as with other brands. The only difference is that you are (more) flexible with your network configuration and you have the benefits from stateless computing, if that is what you want.

In our case we had eight physical UCS B200 M3 Blade Servers available as specified in part 2. When you have pre-configured UCS Manager with all pools and policies that are required, you are ready to create a Server Profile. You can then assign the new Server Profile to a physical server (equipment), boot it and begin installing the Operating System. END_OF_DOCUMENT_TOKEN_TO_BE_REPLACED

These symptoms occur when settings are left behind in the registry. Which is often caused by human error, incorrectly removing a NIC (Network Interface Card) interface, or using an OS image on another machine. Of course there is no one to blame, what seems so simple is sometimes overlooked. Troubleshooting these symptoms can take a lot of time. But in fact they are quit easy to solve. With this blog I hope to make you aware about what you should (not) do when removing or re-adding a NIC. And if you encounter such symptoms, how to solve it.  END_OF_DOCUMENT_TOKEN_TO_BE_REPLACED