You are here: Home / Archives for Microsoft / Windows 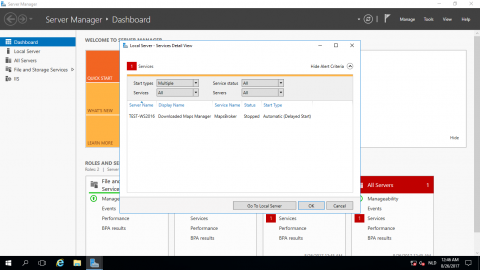 For those who often deploy Windows Server 2016; must have noticed the anoying warning in Server Manager about a stopped service named Downloaded Maps Broker (MapsBroker). Although this service is set to ‘Automatic (Delayed Start)’ it does not start automatically as shown in the following screen-capture:   END_OF_DOCUMENT_TOKEN_TO_BE_REPLACED

These symptoms occur when settings are left behind in the registry. Which is often caused by human error, incorrectly removing a NIC (Network Interface Card) interface, or using an OS image on another machine. Of course there is no one to blame, what seems so simple is sometimes overlooked. Troubleshooting these symptoms can take a lot of time. But in fact they are quit easy to solve. With this blog I hope to make you aware about what you should (not) do when removing or re-adding a NIC. And if you encounter such symptoms, how to solve it.  END_OF_DOCUMENT_TOKEN_TO_BE_REPLACED